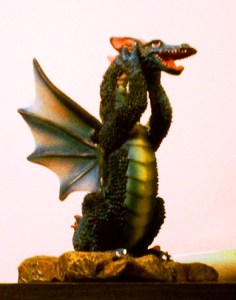 Why must those westerners tell such terrible stories about me?

An electric blue, red-eyed dragon, crawling up my right forearm, wings spread as if about to launch into flight. My husband and I agreed I could get that tattoo once I accomplish a specific goal. I can’t wait. I’ve always found dragons beautiful, especially blue ones. So imagine my shock last week when, during my writers group, one of my friends said, “But dragons aren’t really beautiful, are they?”

Having never considered any other possibility, I had to think about it. Who wouldn’t find them beautiful, and what would affect the beholder’s perspective?

Culture would have to factor in. While dragon legends show the creatures along a diverse continuum, the polar opposites are the eastern and western views. Eastern cultures revere dragons as lucky, protective, magical and heroic. Old western lore tends to depict them am as monstrous, winged killers that burned innocent villages and hoarded treasure. In the latter light, there is certainly little to see as lovely, right? Who in their right mind could appreciate a reptilian bat likely to toast the skin off your bones? These western images illicit fear, not admiration.

Although I’ve been subject to the Smaugs and the Reign of Fire mean dragons, I still can’tcannot bring myself to imagine then as anything less than majestic. If anything, I find the badass dragons as awesome as the nice ones. Killer whales and tigers are amazing despite the fact that they could make a meal of me without batting an eye. You’d be hard pressed to get me close to one, but I love to watch them from a distance. (I might not be able to resist a trained tiger if I ever had the chance to pet one, but an Orca? No way.) I suspect if I ever found myself in a world were malicious dragons exist, I’d probably feel the same way. They’d be incredible…from the other side of a 100-foot pole. However, if I were lucky enough to encounter benevolent dragons, you wouldn’t be able to get me back to planet earth. Until that day comes, I will enjoy immersing myself in and creating tales of sleek, powerful, flying beauties that reflect every color and hue.

And I’ll keep working toward that tattoo.