“Don’t you ever forget about me…,” he whispers during their secret encounters. Like a curse, these simple words now haunt Leandra, a reputable psychiatrist, who finds herself in emotional chaos after the sudden breakup of her illicit affair. Unable to heal on her own and tormented by dreams in which supernatural forces create havoc with her fate, she desperately turns to David, a colleague psychiatrist, asking him to take her through past-life regression therapy. She hopes that this unorthodox and somewhat suspect technique will explain her profound connection to the lover who has abandoned her so abruptly.

The sessions take Leandra through 17th and 19th century Ireland, Italy and England, where love, loss and betrayal are the leitmotifs in an ambiance of co-mingled fantasy and reality. In her hypnotic state, Leandra recounts a saga of intoxicating love, dizzying passion, flaming lust and profound heartbreak. Despite the painful answers she finds under hypnosis, Leandra still cannot let go of the hope to reunite with her lover. Ultimately, the shattering revelations from her past-life incarnations, along with the turmoil over her ruined marriage, become the stepping stones of her introspective path to healing, self-discovery and an appreciation of true love.

With its seamlessly interwoven sub-plots, “Poisonous Whispers” lures the reader from one continent to another, from past to present. The affair at the center of the story is an anatomy of the heart in which the heroine’s sorrow-laced journey reflects the universal themes of love and loss.

As far back as she can remember, Jana has been fascinated by storytelling and intoxicated with the written word. As a young child, she began spinning stories, talking to an imaginary friend and devouring fairy tales. As a teenager, she wrote maudlin love poetry; and as a young mother, a collection of fables. Her love of reading and writing drove her to study languages and literature, resulting in B.A. degrees in English and German Languages and Literature, an M.A. Degree in Literary Studies, as well as a B.Ed. Degree in English and Dramatic Arts. She works for the Government of Canada in the field of military language training and testing and her work, as a subject matter expert, has taken her all over the world. She was born in Sarajevo, Bosnia and Herzegovina but has lived in Canada since 1991.

“Poisonous Whispers” is her debut novel. Currently, she is working on her second novel, as well as a collection of short stories.

She lives in Ottawa, Ontario with her husband. 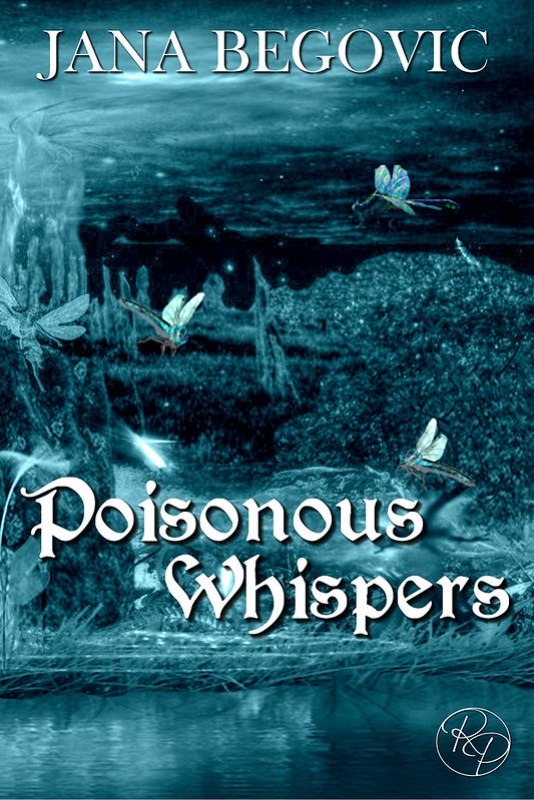 What people are saying about Poisonous Whispers:

“Jana’s romance saga over the years of past lives of Leandra breaks new ground in the romance genre, as her literary style makes this a well-satisfying read.” – 5* Red Penn Reviews

A tiny streak of pale light is cascading softly down the cell window and making a shy sliver in the veil of darkness. I open my eyes, disoriented. I do not move; I do not even dare blink until I get my bearings. Then I remember and freeze in horror. I sit up, an aching all over my body and cold dread in my heart. Instinctively, I try to disentangle my matted hair with my fingers, but it is hopeless. All around me, I smell mold, decay and death. How can I survive another day in this hole? The sound of the door opening with a screech makes me jump in terror.

The gaoler walks in; a heavy set of keys dangling and jingling in his hand.

“Come. You are being moved in preparation for tonight’s execution. A verdict was reached.”

I speak not but follow him. We climb a steep staircase. Below us, I hear moans and yells and what sounds like the death throes of those hopelessly lost to the world and forgotten by justice, compassion and mercy. Again, I am feeling dissociated from the event of my calamity; I see my body walking, but my soul is not in it and indifference over what might happen floods me. Death is not the end. Death offers me salvation from pain, from the torment of living a human life.

We leave the jailhouse and enter the house across the street to the village inn. The inn owner, James Bourke, looks at me with hatred and disdain. He also always hated my husband because his wife had hoped my husband would marry her. She was in love with him, and when he married me she tried to kill herself. James married her later, but has always known that she never stopped loving my husband.

The gaoler takes me upstairs to one of the guest rooms and locks the door behind me. The room is wide and clean even though sparsely furnished. The bed is large and looks inviting and I realize how exhausted I am. On the bed is a white, thin chemise and I immediately understand this is what I will wear tonight when I am pushed off the bridge into the water that is cool even on the hottest of summer days. Will I have the strength or the will to swim and save myself? What surprises and almost delights me under such grave circumstances is a bathtub in the corner of the room. There is steam rising from it and I immediately undress and slip into it, relieved to be able to wash off the dirt, the grime, and above all the horrible stench on my body. I rub myself raw trying to clean my skin. Washing my hair is more difficult because at home I have servants who help me with bathing, dressing and undressing. I have been spoilt by marrying a man of wealth and power. Where is my husband now? I crave his protection. If he saved me now, would I give up Kieran, would I give up love in order to live? I surmise I would.